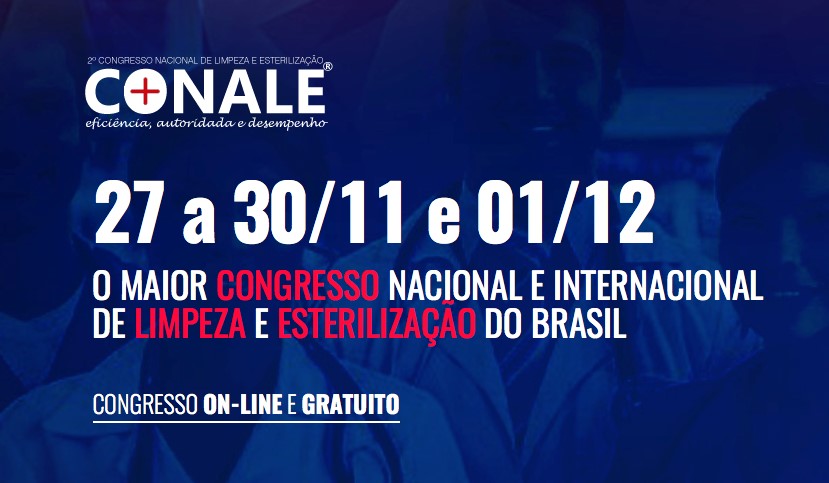 During 5 days of intense activity (from 27th November to 1st December 2017), the 2nd CONALE congress took place, possibly the most international online event dedicated exclusively to the reprocessing of the most widely distributed sanitary devices worldwide. Organized by the Brazilian nurse Ana Miranda, president of CONALE and all her team, the event was broadcast from Brazil under free pre-registration. This fact, together with its "direct" status, allowed the staff of complete sterilization centrals to participate in the presentations and visualize the talks in real time, as if they were attending a Congress. During the first 4 days, more than 27,187 online visualizations of the different talks took place, broadcast by 26 Brazilian and international speakers who made 29 presentations, including 4 satellite symposia of high scientific content. The high level and usefulness of the lectures broadcast demonstrated the high level of responsibility of both participating companies and users for the products they market.

Elena Lorenzo Marfil, head of the MIEC Department of MATACHANA, gave two presentations on 29th November. The first of these, dedicated to the search for ergonomics in the Reprocessing Units of Medical devices (RUMEDs) and later on, an observation test was developed on common errors in RUMEDs. Thanks to their live status, viewers, via Facebook or WhatsApp, were able to contact speakers directly for real-time feedback and questions.

Similarly, Adriana Mendonça, Pharmaceutical Product Specialist of the company H. STRATTNER, distributor of MATACHANA in Brazil, made an interesting statement on "New techniques applied to the cleaning process". Finally, André Luis Moreira, also from H. STRATTNER, was the keynote speaker at one of the satellite symposia, where he spoke about "Hydrogen Peroxide steam/plasma: innovation and safety", centred on the MATACHANA 130 HPO sterilizer.

We thank Ana Miranda, Teresinha Neide de Oliveira, Nurse Organizer of CONALE, as well as Ricardo Alves and Fábio Garcia for the technical support during the 5 days, which guaranteed all the filming, links and visualizations on line.

CONALE has managed to ensure that training in RUMEDs and the sterilization sciences COULD REACH ALL OVER THE WORLD and FREE OF CHARGE, becoming a great gift for health professionals who unfortunately do not have access to this type of educational meeting, either for lack of resources or geographical reasons. Congratulations to the organizers, speakers and congress participants. Thank you for all your hard work, passion and devotion for the CME! (Sterile Material Centrals)

Link to the publication for more information on the event.