During the NasceCME training course of Ribeiro Preto SP, the person in charge of the MATACHANA MIEC section, Mrs. Elena Lorenzo, was distinguished by the nurse Ana Miranda as "NasceCME Ambassador" in Portuguese and Spanish language, accrediting her commitment in the divulgation of information and knowledge, of the Sterilization Sciences.
It was a very special moment, full of emotion, which took place at the beginning of the NasceCME event, dedicated to "Science integrated in the processes of the CME". The NasceCME core, which celebrates its 10th anniversary in 2019, is one of the most important scientific nursing groups in Brazil, organizing a multitude of training courses and events with high-ranking national and international speakers. On a continuous basis, its projection and visibility are more notorious,
and further professionalizing the important role of nursing within these special units in the hospital context, such as RUMED/CME.
Thanks to Ana Miranda and the rest of her team!.... It is a great pride to be your ambassador throughout the world! 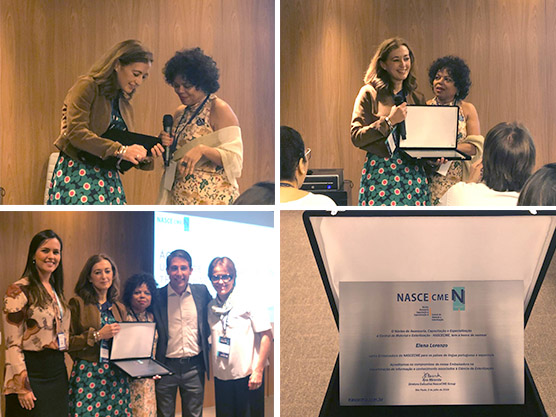